This 13-minute film is an adaptation of a very unusual one-act play titled "Coming Of Age" from the award winning series "UGLY ART" by Terry Roueche. 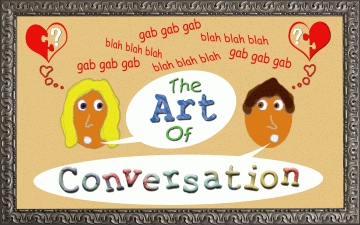 "Hi" is merely your first opportunity to fail...

Robert and Evelyn saw each other at a party several weeks ago and finally run into each other again at an exhibit of "nouveau" monochromatic art. Desperately attracted to each other, their awkward introductions spiral into a strange conversation, where inner voices and outer voices collide. And although it looks like their chances of hooking up is doomed to verbal disaster, their deeper connection pulls them through this sweet, romantic and amusing look at The Art Of Conversation.

The short film is approximately 13 min long. If you have trouble playing it back, you may need to install QuickTime. Enjoy!

You will need a .pdf reader to read the script. If you don't haveone installed, you can download Adobe Acrobat Reader.

"The Art Of Conversation" was first screened at Cinespace in Los Angeles, CA on May 25th, 2006. Although it was submitted to a few festivals, the mounting costs of the submission process became prohibitive, and AFTRA gave me permission to screen it publicly on this web-site for everyone to see! (Thanks AFTRA!)